For more information on our lots, click on 2023 AHCA National Sale

Many thanks to Craig and Mary-Beth Gardner of Lead, South Dakota for the purchase of CSF Echo in the NCHCA Sale. Welcome to Highlands!

CSF Maude was the first heifer born on the farm and she was recently designated an Impact Dam by the American Highland Cattle Association.

Many thanks to the buyers of our cattle in the National Sale in Denver:So happy they are going to these wonderful farms.

Many thanks to Kimberly and Kevin Green of Horns & Hens Farm in Virginia for purchasing our two heifers, CSF Kasota and CSF Delaney, in the NCHCA sale. Sounds like they are headed to a great home.

Many thanks to the buyers of our entries in the Highland Production Sale by NCHCA And extra thanks to Josh Krenz of Windland Flats for his hard work and leadership that made the sale a success!

Many thanks to Jesse and Jamie Silva of Trinity Farms in Greeley, Colorado for purchasing CSF Honeycomb at the AHCA National Sale in Denver.

Many thanks to the buyers of our three heifers in the Highland Production Sale
#15 CSF Daphne to Robert Meyers of Stagecoach Farm in Draper, Virginia
#21 CSF Moondance to Andrew Wessel of Wessel's Farm in West Allis, Wisconsin
#22 CSF Chicory to Deborah Nehls of Rollingwood Farm in Janesville, Wisconsin

And special thanks to Heather Bailey, Josh Krenz, and the Larson and Gruenert families of Four T Acres LLC for hosting a great sale.

Many thanks to the buyers of our heifers in the AHCA National Sale in Denver
#16 CJC Goodness to Terri Thelen from Atoka, Oklahoma
#18 CSF Honeysuckle to Nancy & Schuyler Geller of Elm Hollow Farm from Treadway, Tennessee

And special thanks to Heather Bailey of Cobblestone Farms and the Larson and Gruenert families of Four T Acres LLC for hosting a great AHCA meeting and NCHCA sale.

We had our first divisional winner at the National Western Stock Show this year, when CSF Rutherford (Rusty) took first in the Intermediate Yearling Bull division, giving us our first banner. In addition, Anna, Joe and Margaret's LEA Maggie finished second in a very tough class.

CSF Rutherford was sold at the AHCA Auction in January, 2018 at the National Western Stock Show in Denver. The top bid for Rusty went to Frank Silva of Silva's Highlands in LaSalle, Colorado. Many thanks to Silva's Highlands. 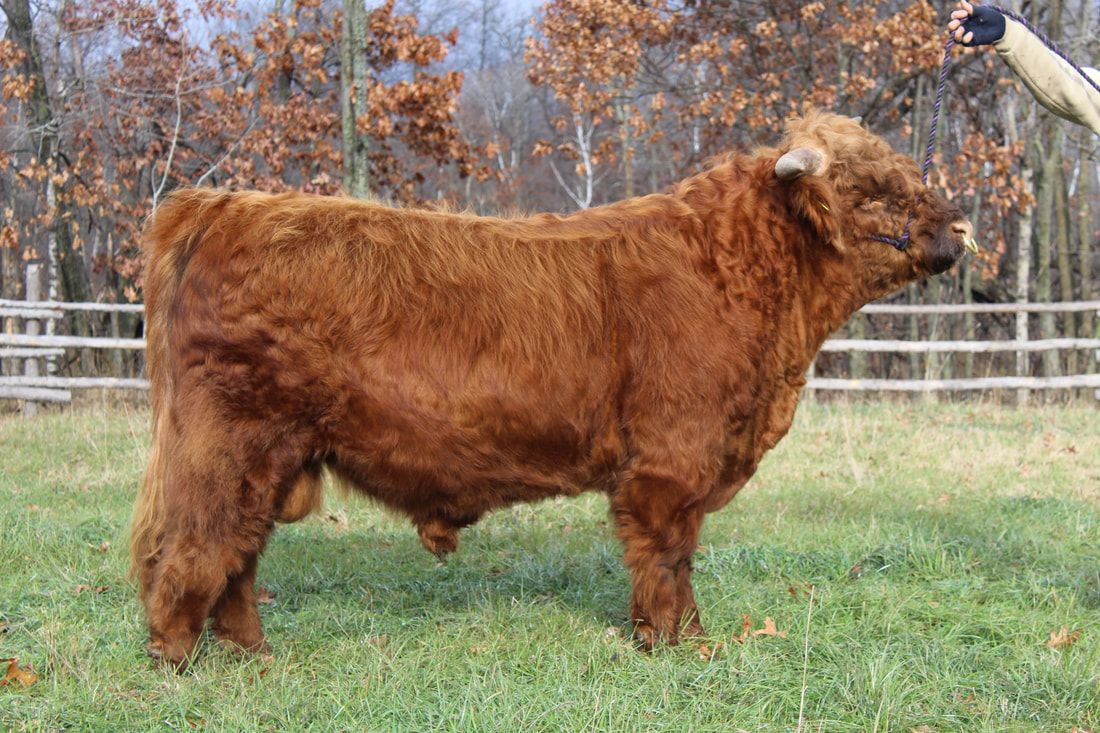 ​
CSF Rutherford (Rusty) is a broad, rugged, heavily muscled yearling bull sired by GOF Ralph, an outstanding Scottish type bull used for many years in the 1980’s by LEA-White Farms. His dam is a stout, heavy milking, cow from Gray Owl’s bull, GH Mr Chips, sire of the Grand Champion Bull, Gray Owl’s Bearach. Rusty has been pastured raised in Minnesota and has successfully covered several cows in his yearling year. In addition to his considerable physical attributes, Rusty is a well-mannered bull with an excellent disposition. For more information, click HERE.

Climbing Stump Farm welcomes two new heifers purchased at the NCHCA Production Sale. GCF Dora from Nebraska and Snowland Verna from the UP. Thanks to Grace Canyon Farm and Snowland Livestock for consigning these fine animals. 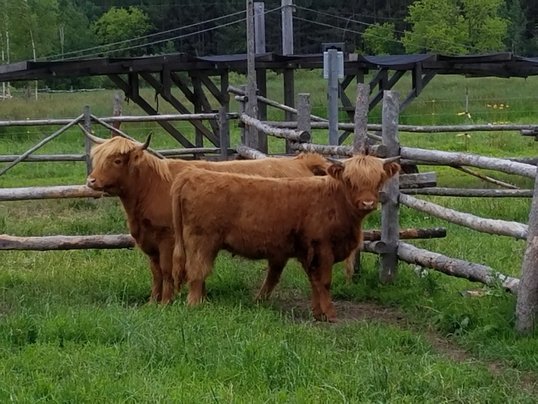 Many thanks to Mat and Kerie Olson of Round Tuit Farm for their purchase of CSF Halvdan the Black at the NCHCA Production Sale on June 24, 2017. We expect he will be happy in his new home grazing that good SE Minnesota grass.
​Halvdan is a correct, long bodied, well-mannered two year old bull sired by Flatheads Glen Moray, a top notch Montana bred bull noted for his exceptional performance on grass. Glen is the sire of the outstanding young bull, LEA Heremon and many fine LEA females. On the dam side, Halvdan is the first calf out of Gray Owl’s Brianna, a maternal  half-sister to Gray Owl’s champion bull, Bearach.  Further back in his pedigree you will find the names of Glen Haven, Trafalgar, Drover Hill, Reiman, Glen Osprey,  LEA White and Schon Boden.  Halvdan’s adjusted  weaning weight  on pasture and milk was 518 lbs. On April 24, just shy of two years old, he weighed 1291 lbs.

CSF Humphrey was sold at the AHCA Auction in January, 2017 at the National Western Stock Show in Denver. The top bid for Humphrey went to Dean and Julie Dally of Taylors Falls, Minnesota. Many thanks to the Dally's. 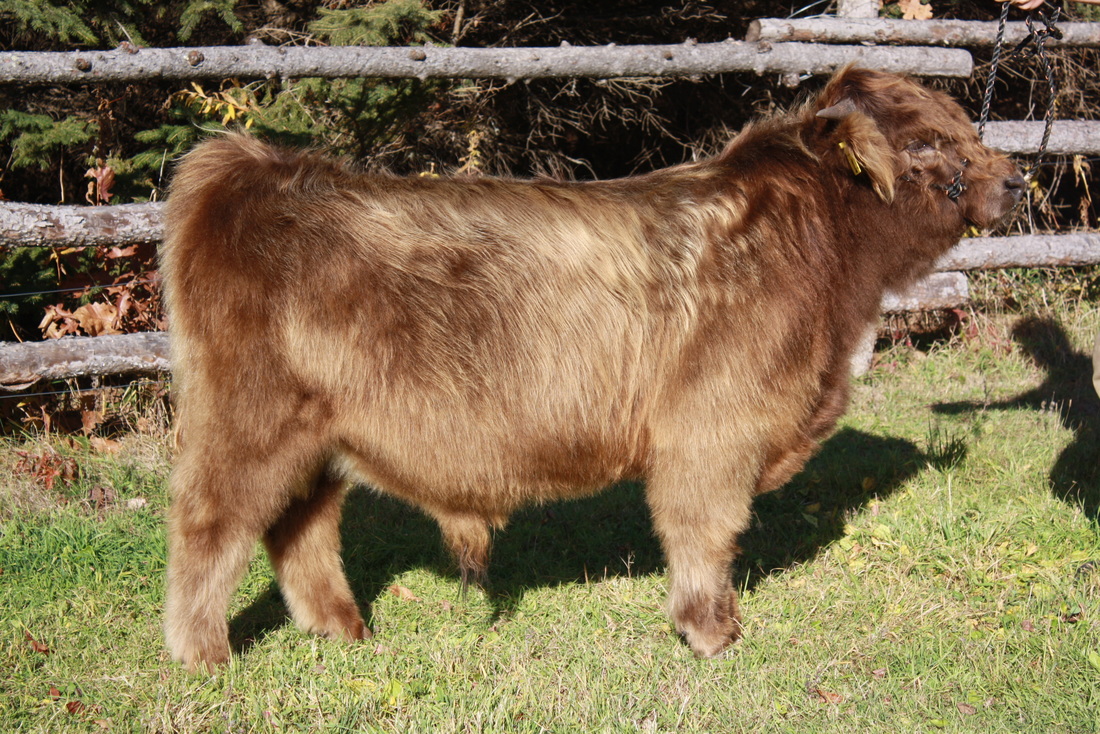 ​CSF Humphrey is a correct, deep bodied, well -mannered bull calf with a strong pedigree. On the dam side he is the first calf out of We Tired Honey, a daughter of We Tired Dora a product of We Tired Acres, LEA White, Summit Ranch, and EZ Acres breeding.  On the sire side he is sired by LEA Denovan Adam, a dun bull from the influential DH White line through DH Montgomery. Humphrey’s birth weight was 75 lbs. and his adjusted weaning weight, on milk, hay and pasture, was 518 lbs. 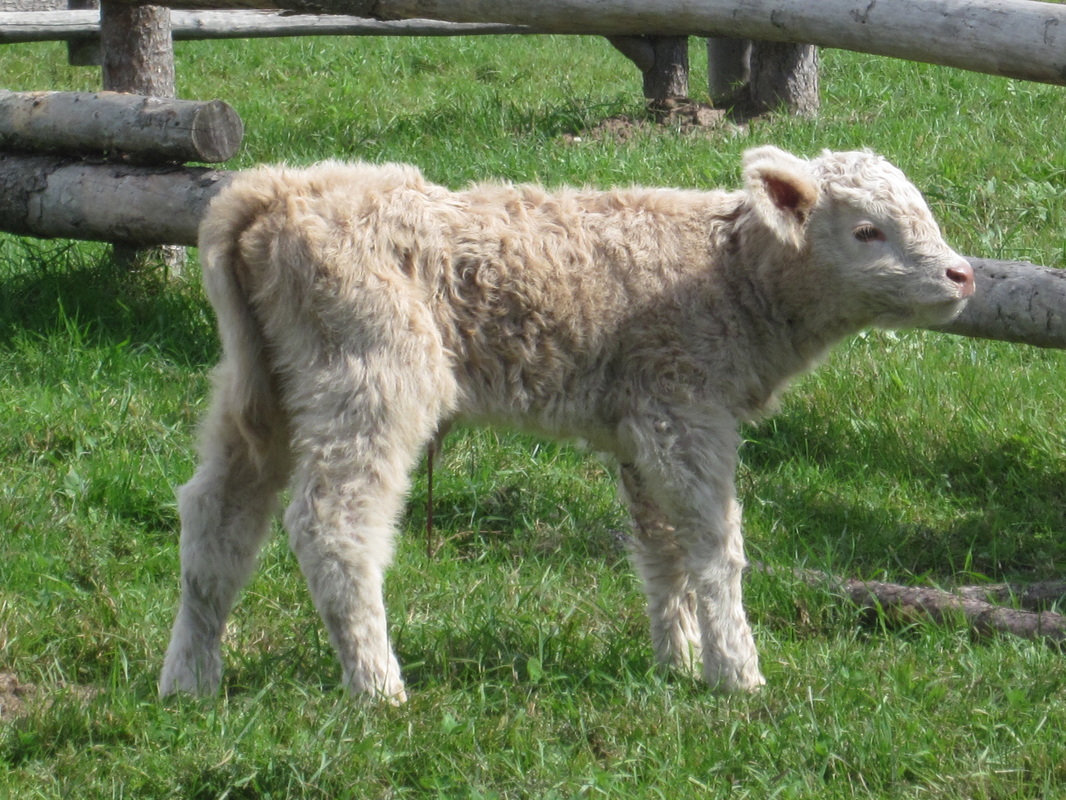 Spring 2016 Calving Season
Number ten is a heifer. Last one until fall.
Heifer calf by Ruairidh of Dalriada out of Gray Owl's Kiera 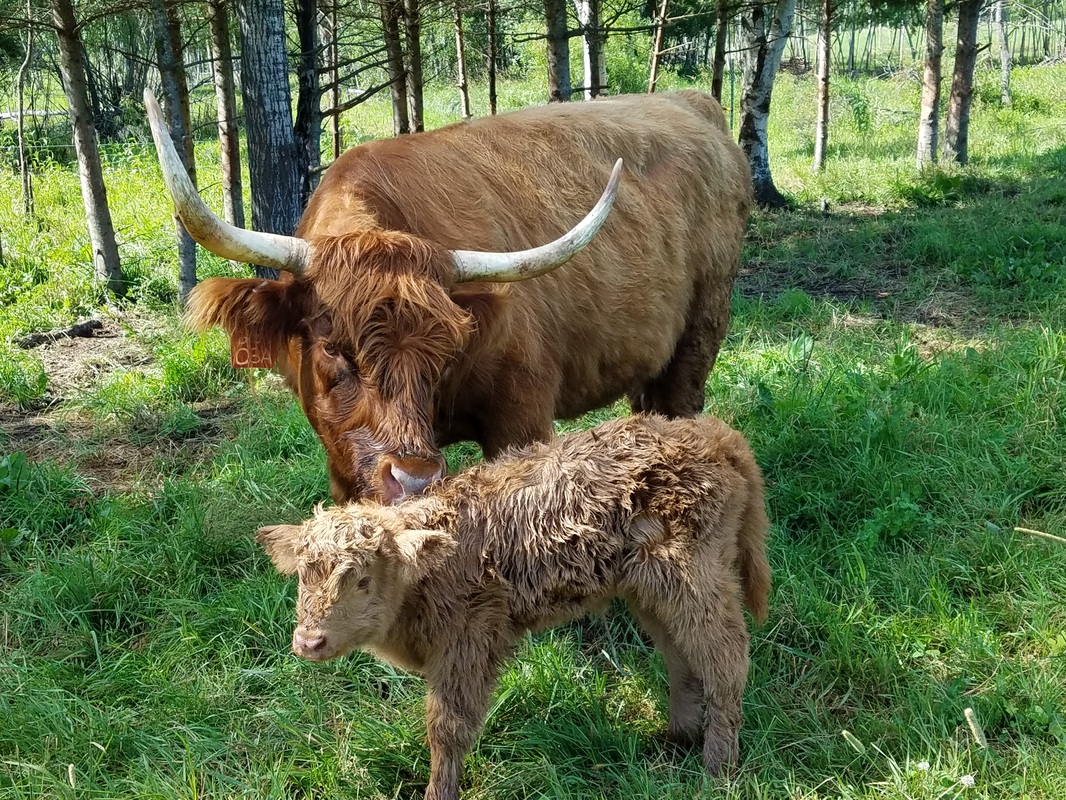 Number nine is a bull.
Bull calf by Ruairidh of Dalriada out of Gray Owl's Mathilda 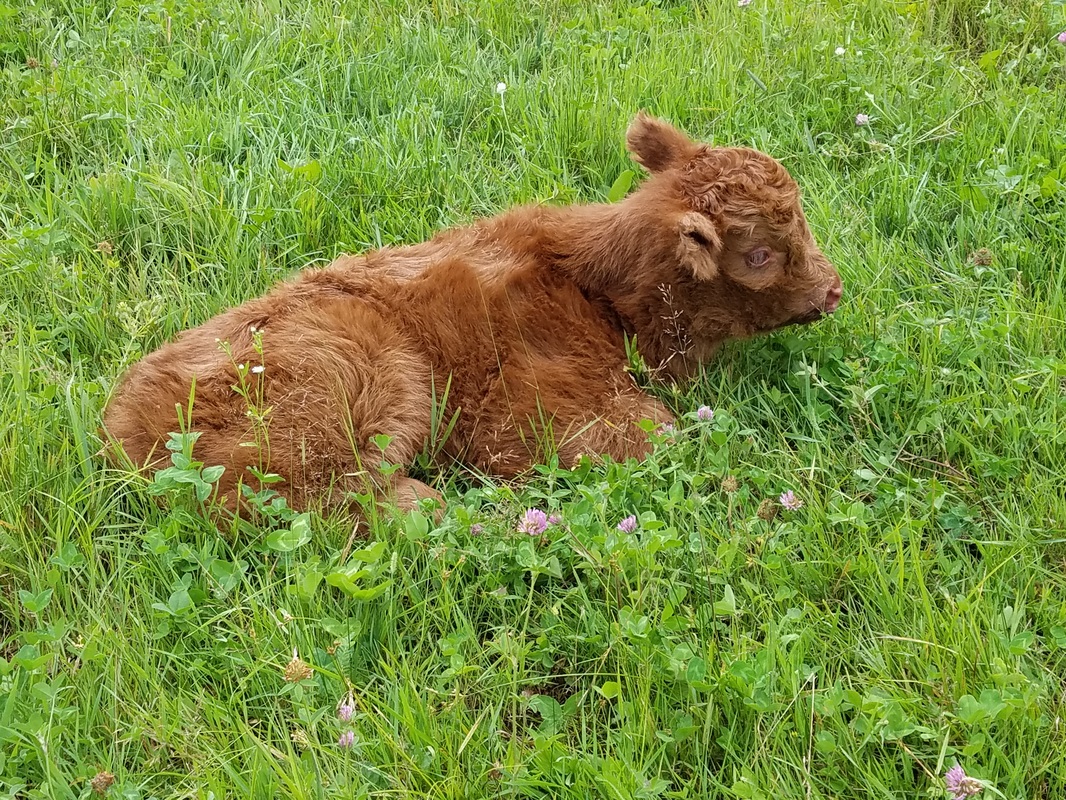 Number eight is a bull. That's seven bulls out of eight calves so far this year.
Bull calf by Ruairidh of Dalriada out of Gray Owl's Brianna 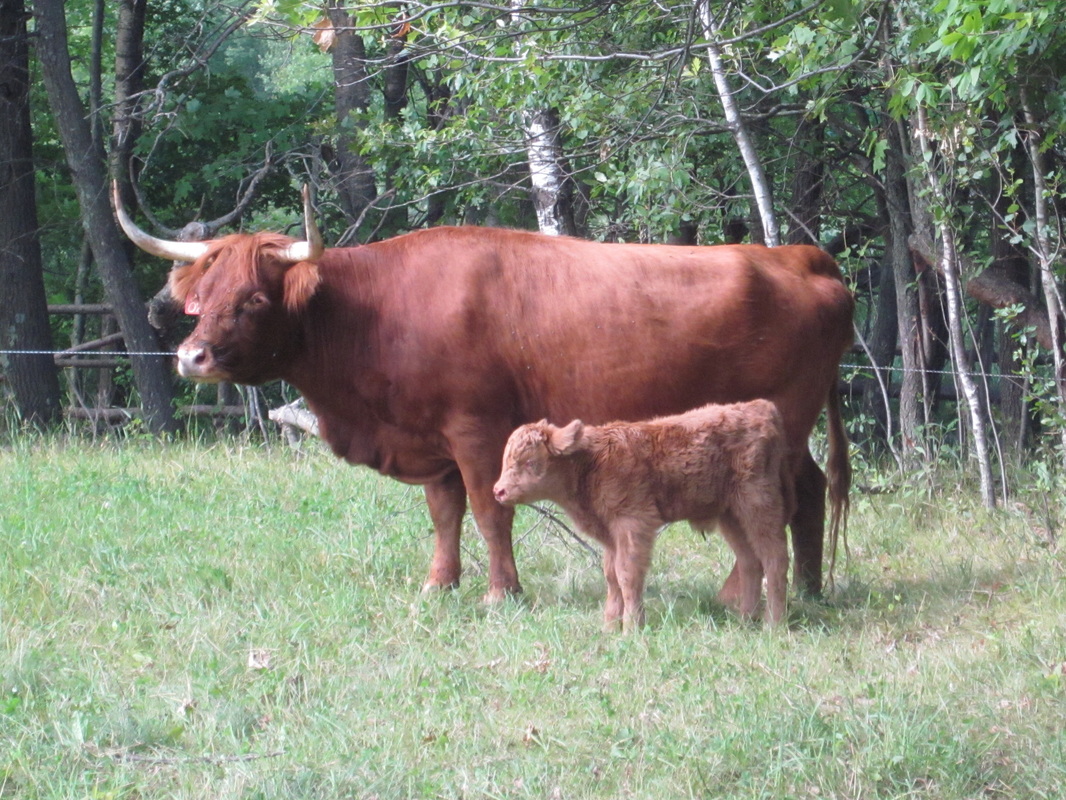 Number seven is a heifer, finally!
Heifer calf by Ruairidh of Dalriada out of Gray Owl's Priscilla 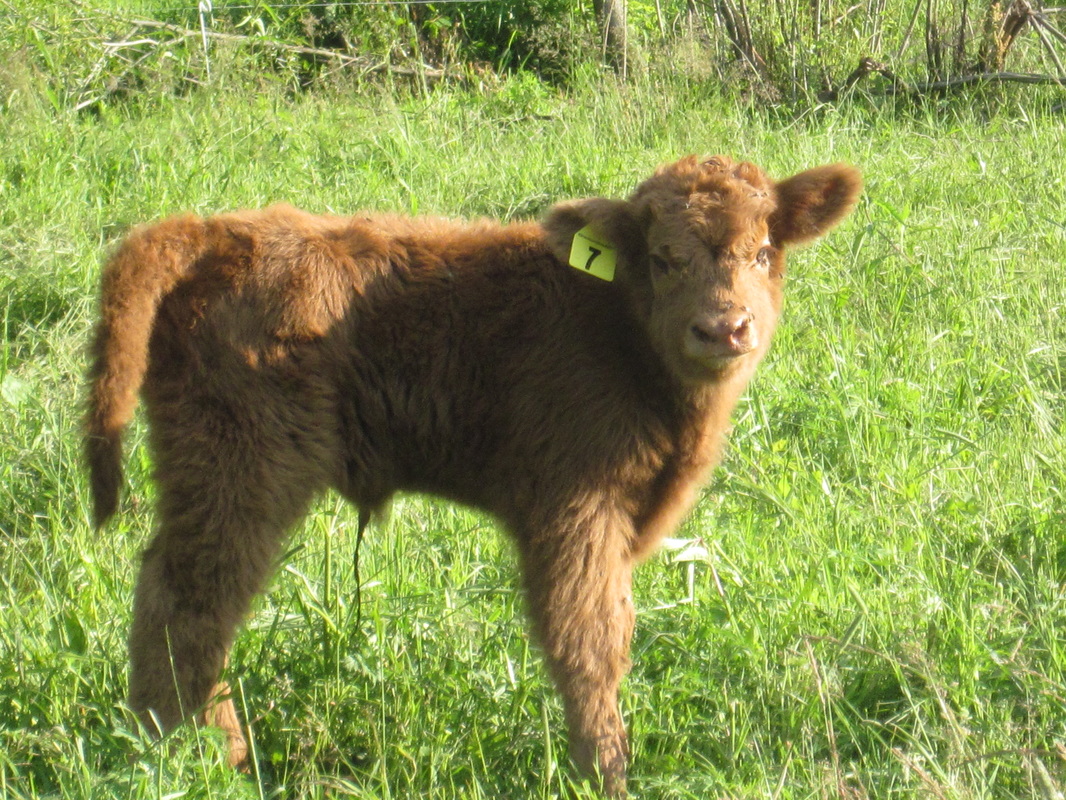 ​All bulls so far...six of six!
Bull calf by Ruairidh of Dalriada out of Gray Owl's Charlette 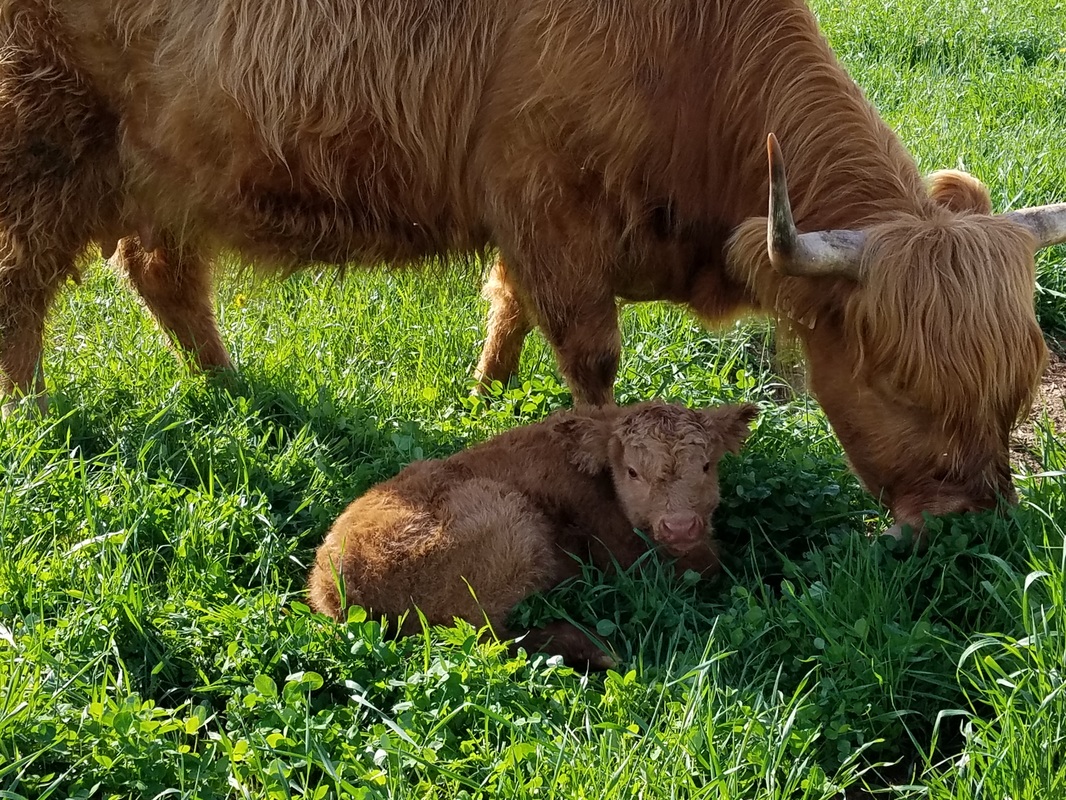 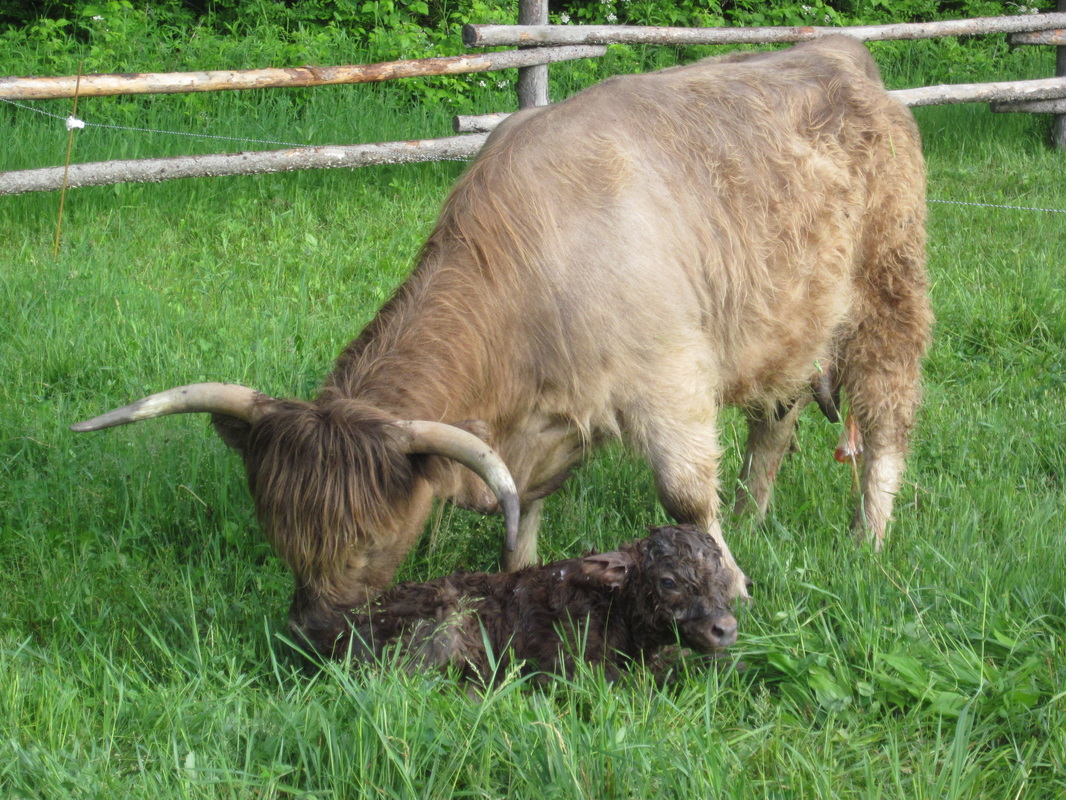 Bull calf by GOF Ralph out of Gray Owl's Claire 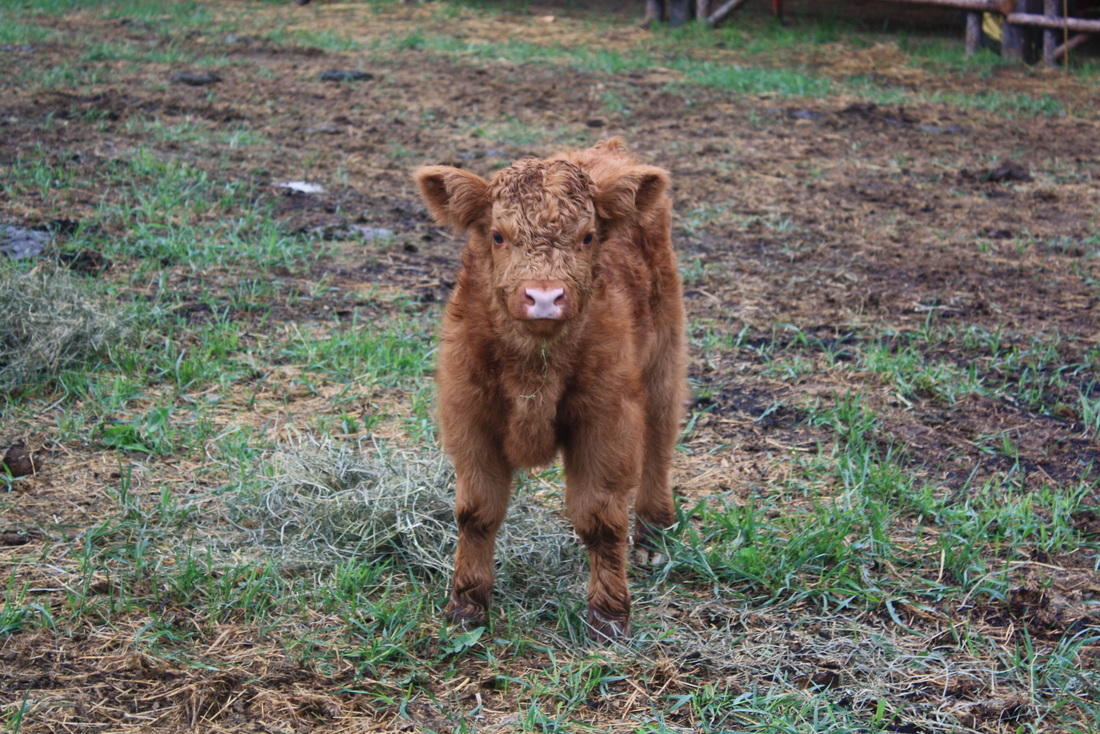 Bull calf by DH Montgomery out of Gray Owl's Shirley 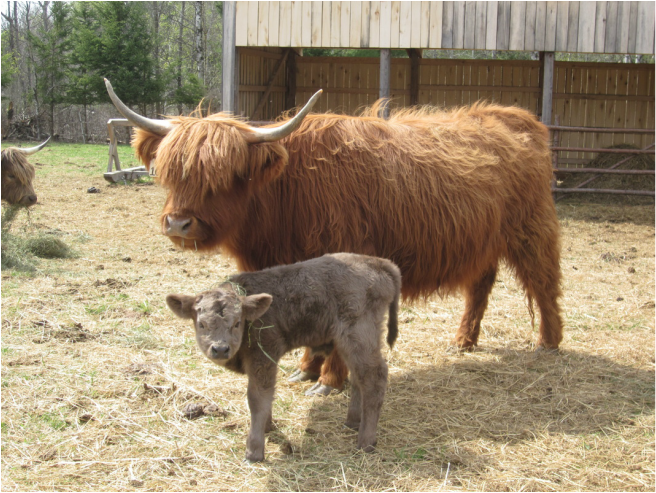 Bull calf by HSC Rebel's Jack out of CBS Celesta 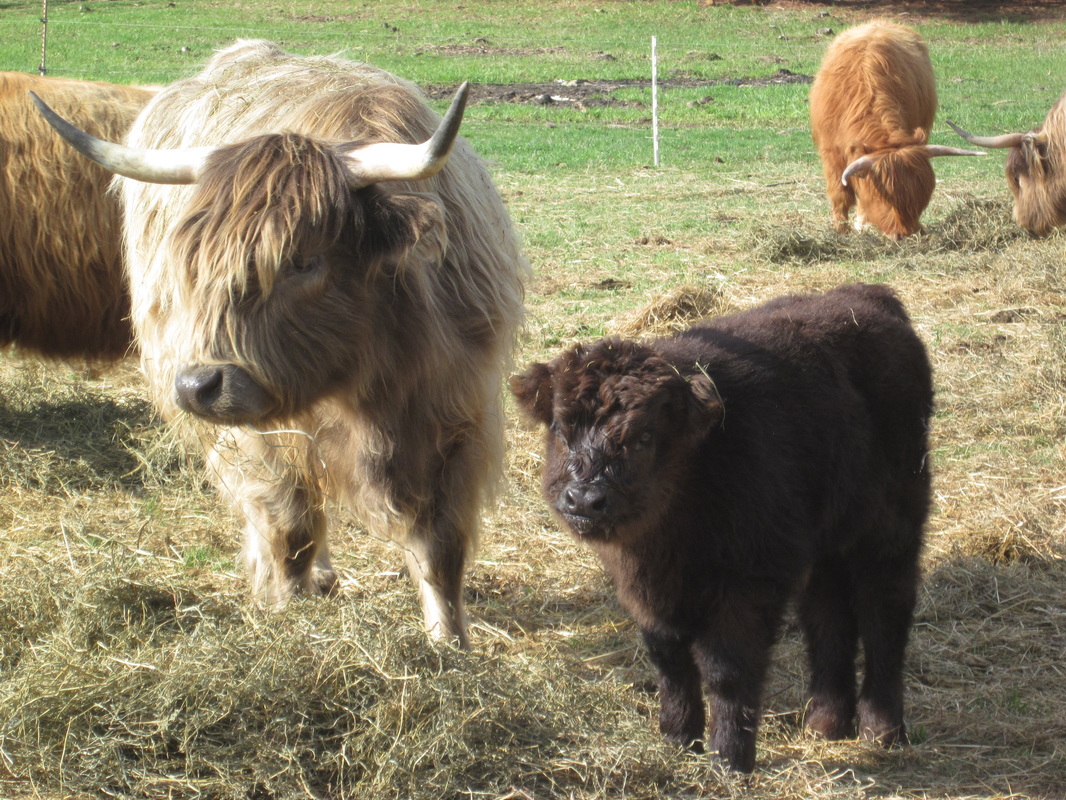 Bull calf by LEA Denovan Adam out of We Tired Honey 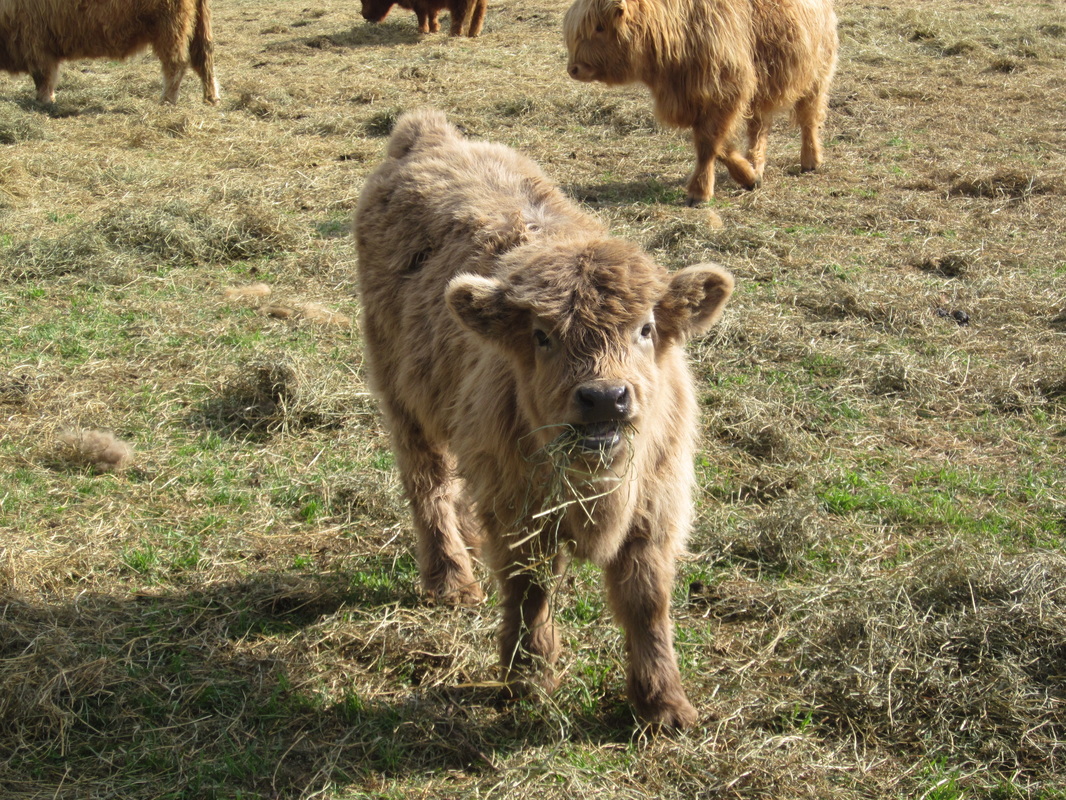